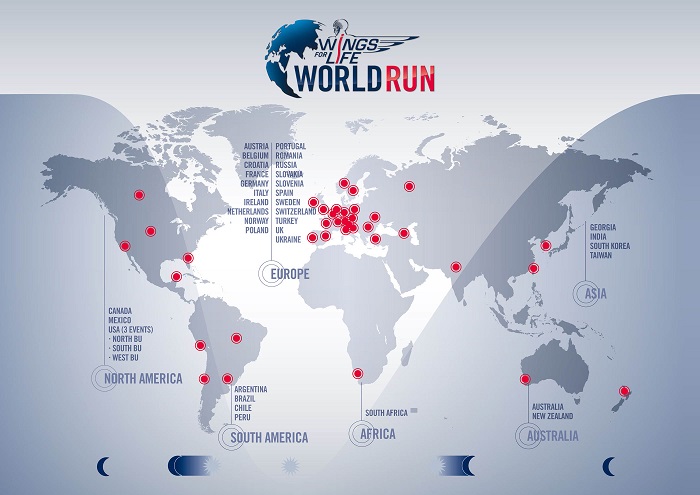 I’d like to say that I was disciplined enough to wake up bright and early, get a good breakfast and head off to the start line of my race, but it just ain’t happenin’..

Besides, the Red Bull Wings for Life World Run isn’t the typical race. Because the start of the race is organized so that everyone around the world starts at the same time, the folks running here in California get to hear the starting bell at 4:00 am. Using my logic, twisted as it may be, I feel it is better to stay up and thru an early event than to sleep only a little and try and drag myself out of bed super early in the morning. I also, figured the race is sponsored by Red Bull, so there would be plenty of energy-boosting drinks about the place if I needed.

About midnight I figured it was time to make the trip from home up to Valencia. I had an hour or so drive and wanted to get there with ample time to get sorted. I have been known to cut race starts a bit close, so I wanted to turn a new leaf, so to speak.

As I pulled up to The Town Center Mall, I neared the area where the start line was the previous year and saw just a vacant lot, beginning to panic just a bit. I kept rolling around the mall and vua lah! All the lights and craziness I would expect from the outrageously awesome peeps at Red Bull. Giant trucks, loud music and a seemingly smooth running registration.

I was running for the Center of Restorative Exercise (C.O.R.E.) and Triumph Foundation teams, so after I got my bib number and swag bag all sorted I headed over to meet with my team members and get ready for the start.

This was the second year of the Wings for Life World Run, but my first year running in it. Sadly, I missed the previous year, but was determined to make it happen this year. The formation of the race is a fund raiser for spinal cord research, so near and dear to me. And, hell it’s Red Bull and all of their events are killer! Plus, the format of the race intrigued me as there is no set finish line a certain distance away. From when the starting gun goes off, you just run your happy ass off until the chase vehicle catches you. Then, tag, you’re it. Or done.. as it were.

As the time grew near, we all gathered right up front at the start line. There were probably 25-30 wheelchair competitors ready to get their roll on, along with a couple thousand AB runners. Still pitch black and well before the butt crack of dawn, we start. Like cattle, we stampede thru the closed off, vacant streets of Valencia. It’s 4 in the morning on a Sunday, no one in their right mind would or should be awake – but we aren’t in our right minds. It is always a self-righteous sort of feeling running/kranking down a city street all by yourself with no car traffic around you. Almost like you own the road. And, as much as I hate to admit it, I do really like the quiet of an early morning without the noise of life bombarding me.

Pretty much right out of the gate I meet up with one of the able-bodied runner buddies. He was whining about not running a lot and how he didn’t think he would be able to go very far. I said, “Well, that makes 2 of us.” We kept a pretty easy pace as we chatted the entire time. One of the Red Bull promoters dubbed “Uncle E”, brave enough to take to the course, had caught up to us and started asking me some questions and taking video on his iPhone. Now, this is talent! Jogging, talking, videoing, and I think he might have been chewing gum, too.

We passed the 5K marker and Uncle E had peeled off to find others to interview. Also, it had seemed that the other fellow roller, Tiphany Adams had gone, too. Not sure at this point if she decided to kick it into high gear or if she faded back, but Kent and I were going to soldier on. We agreed to try our best to make the 10K mark. A good friend of mine had made it that far and in the name of friendly rivalry, I had to at least make it that far.

The 10K mark came and went as the sun started to open its eyes upon us silly people winding through the streets at this ungodly hour. Right as we pass the 15K flag, we hear the people begin to yell and shout as the chase truck catches them, music blaring, announcer cheering everyone on. Kent and I both give our last ditch effort to stretch out our time before the inevitable. Oddly, there were a few buses waiting just up ahead to take people back to the start line. I think it was meant to be..

Still strapped to my chair, I collapsed backwards into the soft, cool grass for a bit before we boarded the bus. Exhausted, I felt I gave it a good effort. Excited to have been part of a very cool event. And now energized with a Red Bull and banana on the bus back. I am a happy camper! 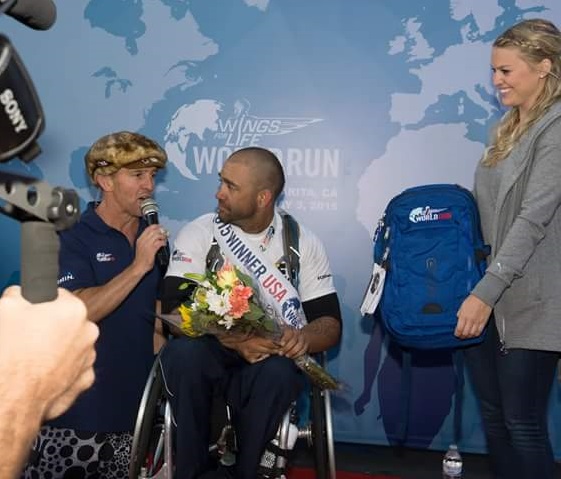 After a bit of confusion by the bus driver in where to drop us off at we reach the main meeting area once again and I am being beckoned off the bus urgently, being advised that the people from Red Bull are looking for me. As I depart the bus, I am not sure what is going on. Am I in trouble? Is the team getting a picture all together? All I know is that the lack of sleep, 15K of exertion, and couple Red Bulls I have already ingested are making for one confused brain.

As I get onto the red carpet a camera man, one of the promoting girls and our friend Uncle E come right up to me and explain that I have won the wheelchair division of the race and they want to interview me. They bring me over to a spot by their backdrop and people are congratulating me and everyone is sharing their adrenalin high from the run. I am interviewed by Uncle E and presented with a sash and flowers like the prom queen I always wanted to be and given a very cool Ogio backpack with the Wings for Life logo embroidered on it. Stoked and still a bit foggy about it all, I can’t stop from smiling and laughing. 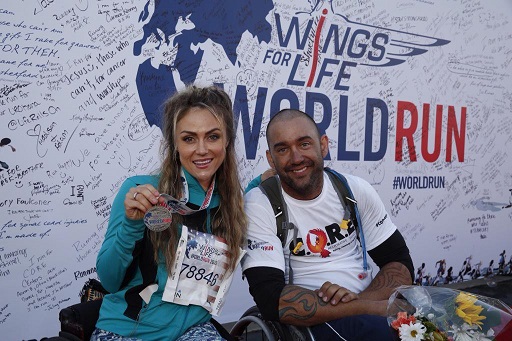 After the interview and a ton of photos by everyone are done, the crowd settles and people start to head out on their ways. I load up on my car and take a deep breath, trying to absorb all of what has just transpired. Such a fun day. Great event. Great people. Great cause.

Then, I decided I was going to take a peek at what swag I got in my new backpack. I was expecting some promo material from the various sponsors, a Red Bull magazine, who knows.. But when I opened each pocket I was blown away! My winnings included: a Vestal watch, Oakley Two Face sunglasses, a Garmin Virb Elite camera, a Goal Zero Flip 10 charger, and a SkullCandy Ambush bluetooth speaker.

I cannot say enough about this event. Red Bull has always impressed me with their events and I have always loved their image. This was the first event that I was part of and I felt it was very well run, well promoted and just overall well done. I look forward to doing the World Run again next year and hopefully being part of other events in the future.

Also, I want to that C.O.R.E. (www.corecenters.info) and Triumph Foundation (www.triumph-foundation.org) for your support in all my crazy endeavors.