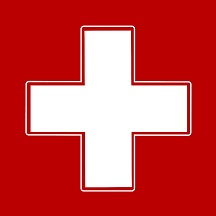 On June 9th, 2015 I finally made the major step to fix the damage done by my own inner stubborn battle. On my own, I had been trying to heal a persistent pressure wound on my hip for about a year and a half and in an instant it had gotten well out of my control. I had to give in, ultimately wave the white flag and get better advice than what I knew.

In October of 2013, I was on a 26-day trip around cities in the eastern provinces of China to showcase the sport of handcycling to people there and share my experiences. Six of those days we decided to handcycle between the cities with our gear instead of using trains or planes. We covered about 250 kilometers, using every bit of the daylight hours that we could and paying no attention to the rainy weather that would inevitably catch us.

The trip was a huge success with many smiles and memories shared and created, but not too long after I returned home I noticed I brought something else back with me to remember the trip. A pressure wound had appeared on my left hip and I instantly knew where it had come from. All those long days on a rain-soaked, foam cushion krankin’ out the k’s had left its mark, literally.

I have had pressure sores in the past. I even started my paralysis journey with one from the day I first went into the ER after my car wreck when the paramedics left me on the long board for way too long. I was taught a few things in order to take care of them and had even healed a few minor ones on my own. I didn’t see this one as a big deal, got my supplies and patched it up. I got this, so I thought..

After all the time spent still thinking I had this thing under control, one day it proved me wrong. On Memorial Day (May 25th, 2015) driving home from a Triumph Foundation Shooting Range Day I felt as though I might have a bit of a fever – my skin felt warm even to my own touch. I instantly got worried and as soon as I got home I went to check and change my bandage. Drainage from the wound had soaked the bandage so much that the seal was completely gone.

Once I removed the bandage the rest of the way, I could see the tissue inside the wound had turned completely black and dead. Now, I was really scared. I was forced to admit that the wound had gotten infected, my biggest fear. I went through a similar ordeal with an infected wound back in 2003 and DID NOT want to go through that again. I knew it was bad, but not much I can do at this point accept clean it up and put on a new bandage.

I started calling on people in the know to see about getting a referral to a good wound doctor, which I found up in Valencia – Dr. Brian Downs, part of the Henry Mayo Hospital system. Two weeks went by from the day out at the range and my energy had dramatically decreased. I was so worried that the doctor would tell me that I would have to stop working to heal this and I had bills that weren't going to just go away, even if I was sick. I have responsibilities now. It's part of that adult thing we all try to avoid.

After a couple conversations with my mother she took charge, doing some serious fund raising, The doctor did strongly suggest that I check myself into the hospital and have surgery on my wound. He explained that it would be about 2-3 month’s recovery. In a very short amount of time my mother had already gained some serious steam in fund raising and I felt I could relax and focus on my healing.

With the weight of money off my shoulders, I took the doc’s advice and was prepared to take on whatever came next. Let’s get this thing taken care of, and taken care of the right way. I literally rolled from the doctor’s office right into the ER and was admitted directly. They started IV antibiotics and fluids right away and the doctors each started to come to my room to explain the process soon to follow. One surgeon did a temporary diverted colostomy. We agreed it was a good idea due to the location of the wound being close to my rectum, to keep that area clean, and the fact that I would be flat in bed for at least a month making a bowel program downright difficult to manage, anyway.

A couple days later, another surgeon dug into the wound itself. After clearing away the dead tissue and even scraping some bone from my pelvis where he found the bone had gotten infected. He found out that the new wound had tunneled far enough to find an open cavern area left by the hack doctor that repaired my previous wound 12 years ago. He explained that there just wasn’t enough tissue to work with and requested that I go to a skilled nursing facility for a month to heal and grow some tissue back. 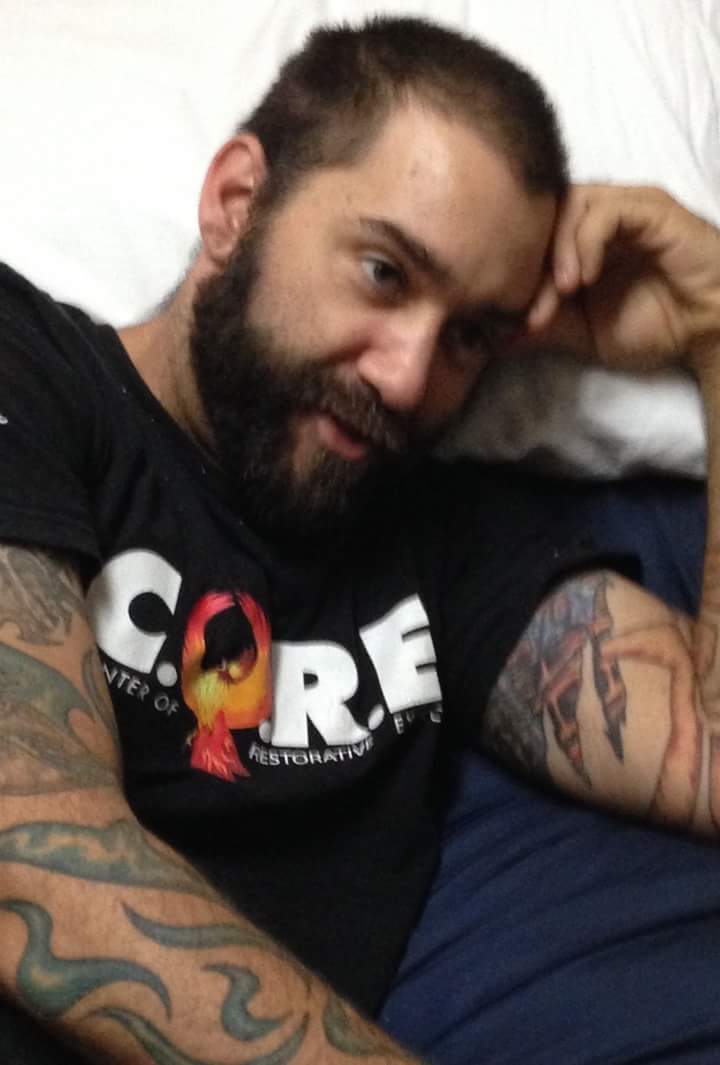 I was transferred to Dreier’s Nursing Center in Glendale for the next stage. We pick this particular one due to its close convenient location and seemingly ok reviews. Upon arrival, I could feel that this was going to be a rough one. The first night I had a roommate who Bogarted the remote to the tv and left it on all night long with the volume up. The wound vac unit and Clinitron bed that were supposed to be there didn’t come for 4 days. I was truly worried. The nursing staff was a skeleton crew padded with inept attendants and CNAs. And don’t even get me started on the food..

After my month stretch on lockdown, Dr. Paul Tran took another look and said we could do the flap surgery finally. So, back to Henry Mayo I go. As hospitals go, I was so glad to be back here. I felt safe in the staff’s hands and everything about the place gets high marks from me. As much as I don’t want to be in the hospital, I am glad to be back where I trust people to provide the best care and I can relax once again. Even small things such as the colored coded scrubs makes things so much easier -- dark blue means RN and burgundy is CNA. Otherwise, who is this coming in, a random low-level person to change my wound dressing? 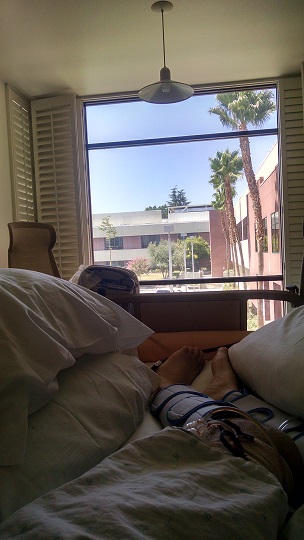 Dr. Tran works his magic in the operating room and get’s me all stitched back up – 41 staples and a few sutures, to be exact. There was still so little tissue in that area that he robbed some muscle from my hamstring and transplanted it in my butt. I spent a few days recovering before being shipped off to another skilled nursing facility. This time I went with the doc’s recommendation of Tarzana Health and Rehab. Center. He had sent patients there before and was confident in their abilities and care level.

A little side note, as I am leaving Henry Mayo for the second time the nurse comes in and says they have to do a nasal swap to check for things like MRSA when they transfer patients to other facilities yet they didn't when I left the first time to Drier’s. It is interesting how the "per protocol" stuff seems subjective.

Tarzana proved to be quite a bit better than Dreier's, but still was definitely not great. The quality of care was better, the food was more edible (see my blog about Nutrition in Nursing Homes), and the rooms where a lot nicer, but still seemed lacking to me. Maybe it was because I was so spoiled with the high levels I received at Henry Mayo. Even strange things popped out at me, like the doctor’s parking spot is the closest to the door, pushing the handicap spots down. So, he gets to walk a shorter distance than someone who really can’t?? If the doc is that lacking in mobility, why is he still practicing?

Anyway, so I do another 4 weeks plus stretch at Tarzana and I finally get the a-ok to go home. The wound is closed and healing well, but I am still restricted for a few weeks in how much time I can spend in my chair, but at least I can do it at home now. I was sent home with the requirement of an air mattress for my bed and a home health nurse to come and change the last bit of dressing on my incision.

The nurse from Assisted Healthcare was tolerable, but the people over at Prime Medical really didn't get the point when I had ordered an air overlay for my bed, explaining that I didn't have room for the full on hospital bed that they were originally going to send to me. When they arrived to set everything up, they came with an air mattress built for a hospital bed that was way too tall to fit over my mattress, so it had to be placed on the couch in the living room and I made it work. I am still not sure if they did it on purpose or just weren't listening.

In all of this, I really learned a lot. I learned how so much of the medical industry works from insurances to facilities. I learned you have to be very proactive in your care and be in good communication with your doctors and nurses. I learned that I need to stop being so stubborn and independent. To let people who know better than me in on the situation. And I learned that you just can’t let things like this go on, assuming they will just get better.

This has been the most medically intensive "para ordeal" I have had to go through in my 20+ years. It was definitely an eye opening, learning experience for me. I hope that the words you’ve read will stick in your mind and hopefully prevent you from either getting a pressure wound or at least getting it under control before it is too late. I don’t aim to whip anyone into paranoia about sores. I just want you all to be careful.

A huge thank you goes out to all my friends that came to see me. And to all of you that have supported me along this road. She has been a bumpy one, but the end is in sight. I’ll be back to being me soon.